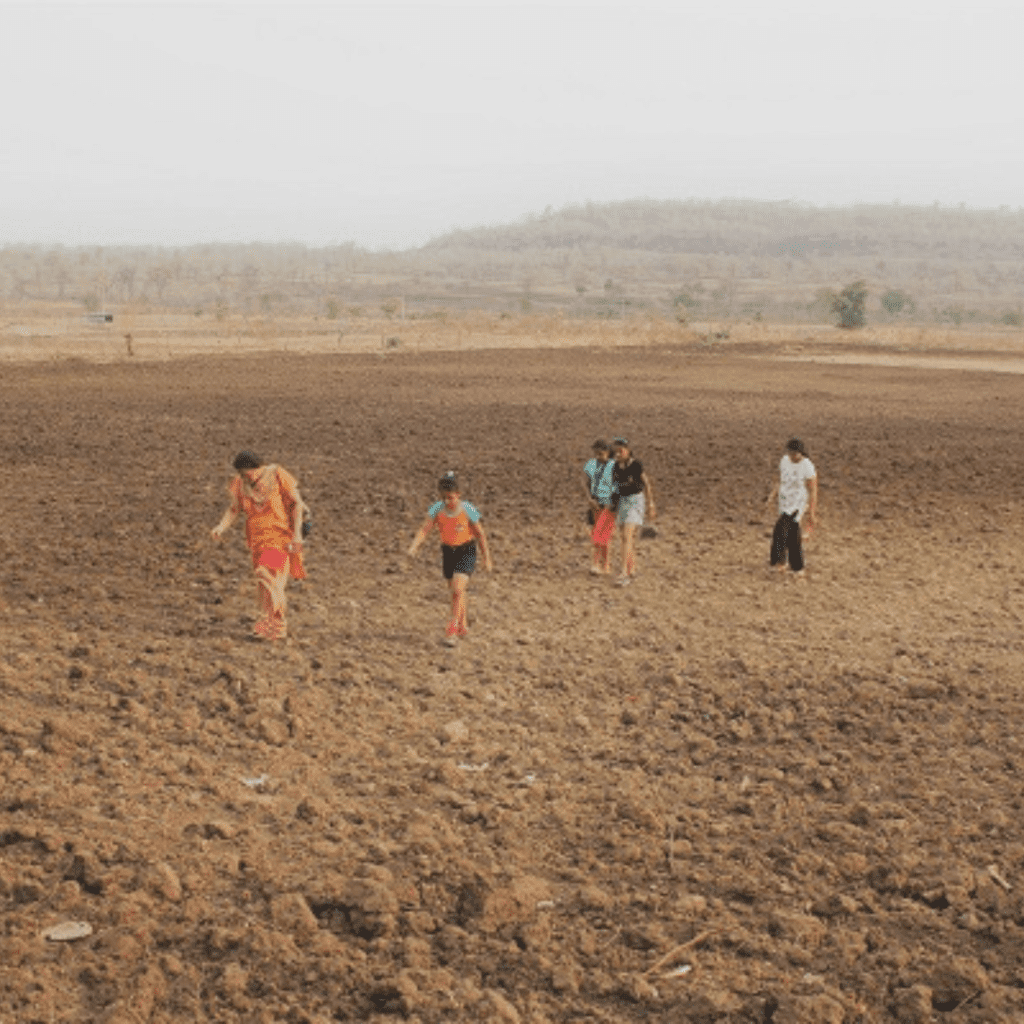 It was the month of May. We wanted to get away from the heat and our daily routine. We’d heard about Tipeshwar Wildlife Sanctuary in Maharashtra on our last trip to Tadoba, so we decided to check it out. We knew the place would be hot, but we were so not prepared for quite literally an “out of the frying pan and into the fire” kinda experience!

Tipeshwar is about 5 hours from Hyderabad, which is awesome. It isn’t as far as Tadoba, but is on the same route. We booked our stay at a newly opened resort right at the entrance to the sanctuary. We left home around 1 pm and reached by 6:30. We would have reached earlier had we not stopped to change our punctured tire. That took us nearly an hour as we had to figure out how to get the spare tire out of the car and find that there was no air in it. Thankfully there was a petrol bunk right opposite to where we had stopped. Our men rolled the huge tire across the highway like a couple of 6 year olds having fun along the way, pumped air by themselves and rolled it right back. We didn’t stop anywhere after the fiasco.

We got onto a rocky terrain after the smooth highway, to make our way towards Sunna gate. There were low-roofed squalid huts, tiny stores that seemed poorly stocked and women walking around holding cans to attend to nature’s call in the fields nearby. It wasn’t a pretty picture. In fact it made me realize how granted we take basic facilities like a comfortable home, a restroom etc. After much driving we finally reached our destination. It was sundown time, yet it was too hot, the air thick and hard to breathe in. It took a while for our bodies to get used to the heat.

The rooms (tents) made of canvas were spacious and clean. Since it was hot outside, it was hot inside as well, despite the fully functional ACs in every room, but I did not mind. I sat and read and wrote and slept whenever I could, as the kids were with their cousins in the other room. When the power went out, which was quite frequently, the Generators were turned ON. Food was delicious and healthy throughout our stay. With so many kids in the group, the cooks even customized our food to suit our varied tastes, without bickering. I don’t know if the exceptional Customer service was because there weren’t any other guests in the resort!

Our Walk in the morning took us through barren lands, cracked open, yearning for Rain water. A couple of workers from the hotel accompanied us along with a house-dog (There were a lot of Dogs at the resort, but they were a harmless sort. They barked at the wild boars, which were a menace. Take care of your shoes and snacks though!) We crossed ploughed fields, climbed atop a mountain full of dry teak trees and leafy tendu trees (that are used in making beedis. Apparently the fruit is a delicacy around here). It felt a bit breezy atop the mountain. Madhav walked bravely and earned the affection of the staff, who kept calling his name and going out of their way to help him cross the slippery dips and climbs. The way back was a bit scary and exhausting, but everyone enjoyed the adventure, even the less-prepared ones wearing slippers instead of shoes. On our return, we tried climbing the machaan (a wooden platform used for viewing wildlife). Madhav and I struggled while Medha climbed like a monkey. She kept going up and down, up and down.

Our Safari into the jungle was HOT! It was 3 in the afternoon and the Sun was overhead. We were loaded with quite a few bottles of lemon juice and water, but we realized, that pretty soon we would have a shortage, no, a crisis at hand!

We drove through rocky roads, ascended hills, turned curves and everywhere the landscape was barren- bald trees and parched soil. We could spot the birds and animals easily. Usually I suck at sighting, but this time I pointed out all the creatures left and right. We saw the usual monkeys, Peacocks, spotted deers and nilgais. Indian Rollerbirds with their blue, wide wingspan became a hit with the adults and kids alike. They were everywhere and provided such cool bursts of color amidst the brown and muddy landscape.

All we did inside the jungle was park our vehicles by the Tipeshwar lake and waited, for hours. Kids began getting restless as they weren’t allowed to talk or get out of the vehicle, play or eat snacks as that would make them even more thirsty. They took turns and sometimes squabbled over whose turn it was to see through the binoculars we had. There were herons and peacocks and other birds by the lake. Nilgais and Spotted deers could be seen quenching their thirst too. A few jeeps left, but we were told to wait as the tigers would come out for water. And they did, just as it was time for us to leave. There were 3 cubs and a mama tiger who all came, one by one, to take long swigs from the lake and just loll beside it. All the animals, except a few birds, had vacated the premises by then. All of this happened quite far from us. I had to zoom in through my camera to see them. Although we enjoyed the sight of the Tigers and were reluctant to leave, I felt that we were more worried about whether we would have enough water to drink till we reached our hotel! We asked other people if they had any water to share. Some lent us, some didn’t. And when it was time to leave, our guide brought us a bottle from somewhere which we simply gulped down. fighting over whose turn it was to drink! We’d lost it! I feel so ashamed of myself just thinking about it now.

Can you spot the 3 cubs?

We made our way back in the dark. It was Medha’s birthday and the men had gone and bought a cake, so we got Medha to cut it during dinner. Someone said the cake looked a bit funny. Tipeshwar is not a big city to house a fancy bakery, of course the cake would look and taste funny! But Medha was happy she got to celebrate her birthday in the jungle with her cousins! Thank God we were fine the next morning, despite all the things we subjected our bodies to!

What a rough night it was! Medha dozed off right away. Madhav slept with his grandparents in the other room. Somehow I couldn’t sleep, so I just read. It felt like there was a knock on the door every few minutes. I thought the dogs were just playing. Then I heard the wind howling. It was picking up its intensity, almost pushing open our locked doors. Then came the thunder. I thought our tents would be blown away or get burnt due to lightning. I simply read on…. Then I heard Madhav’s voice. “Mama”, “mama” he called out. I ran out, all panicky, my wildly-beating heart in my mouth, assuming his tent had blown off and that he was getting drenched in the rain with his grandparents! But…

He was just having a good time while the grandparents were out checking what was going on! That kid! I was worried sick! After a rough night through which we hardly slept, I thought our safari in the morning would be cancelled, but it hadn’t. It was 5 when we were woken up by the staff. We were late! There was quite a throng of visitors already lined up by the gate to the jungle! We got ready and left. And then we were told that one of our jeeps had broken down and there was just one. We thought of taking our Fortuner inside, but decided not to. The roads were not suitable for our car and we didn’t have a spare tire. All of us, that is 6 adults and 5 kids, squeezed into a single jeep and crawled into the jungle once again. It looked beautiful in a bent-but-not-broken kinda way! The rain that had scared us last night hadn’t ruffled most of the jungle’s feather! Everything still looked dry and barren, but there was beauty in it, or maybe, it seemed to me to be so. I understand that nature goes through these cycles called seasons and now it was time for summer, peak summer that too.

This time we were well prepared with lots of water bottles, but we weren’t as thirsty. We waited a long while by the lake again, but this time had no chance. Someone said they spotted the Star male (the sole male, the father of the cubs we saw) in another location. We went there but he had left by then. We were a tad disappointed, but It’s all a matter of luck we know. We got back to our rooms, got ready, settled our dues. (About 45,000 for 3 rooms for 2 nights i.e 7500 Rupees per room per night inclusive of food. ). The jeeps were paid separately- 950 for permit, 2000 for drivers. We had to pay for 3 jeeps as the fourth one had broken down. We thanked the folks at the resort wholeheartedly and left.

Tipeshwar is so close to home, we will surely pay a visit in the cooler months.