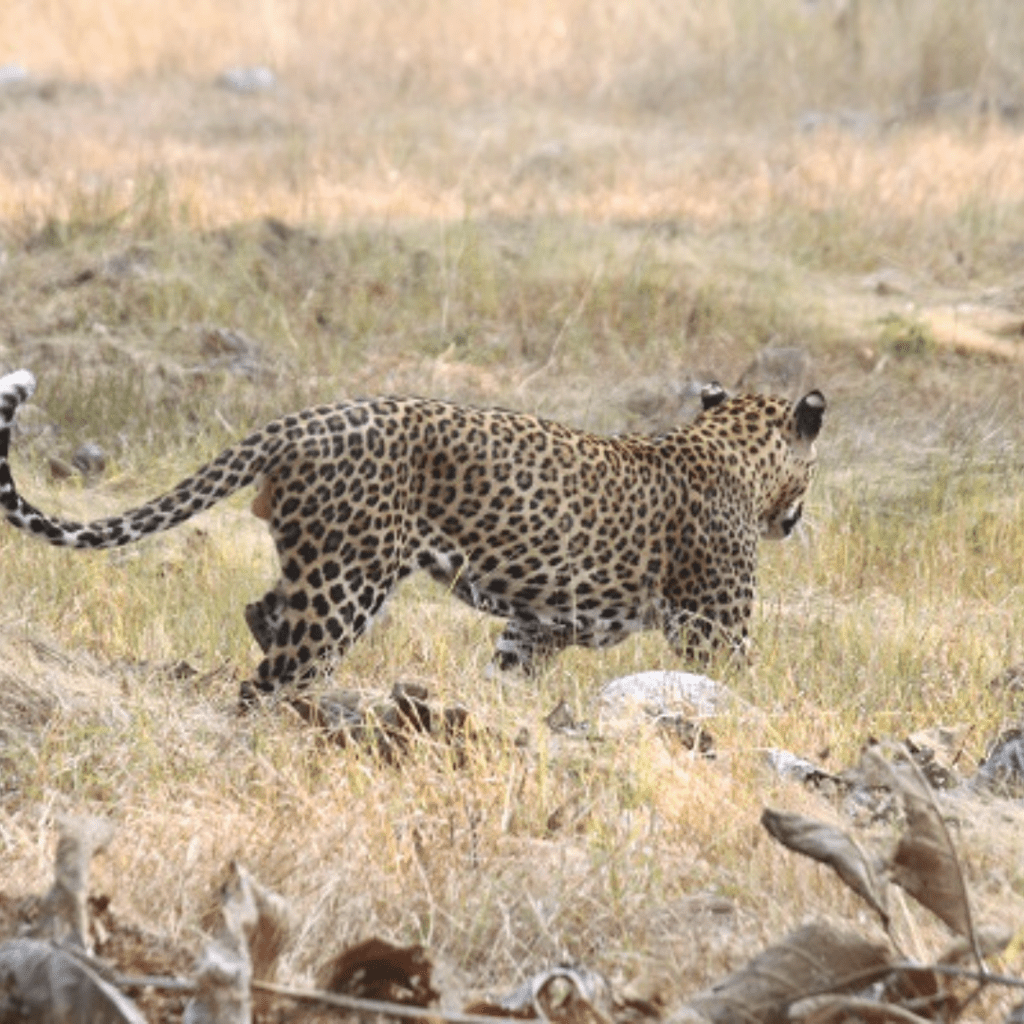 It was our third visit to Tadoba-Andhari Tiger Reserve. (You can read about our first here and here) Shruthi, Ashwin and little Shristi (who were visiting us from the US) joined us along with other family members. We needed a couple of SUVs to carry us all to our favorite Jharana Lodge. After the welcome drink (refreshing), lunch (delicious) and watching a few resident male Turkeys woo a female (noisy and endless), it was time for one of our favorite parts of visiting a jungle – Tiger Safari.

We’d booked 2 jeeps into the core area. No sooner did we enter the Jungle than we spotted a couple of bears foraging on grass and insects. They were huge and it seemed funny that they were feeding on bugs instead of something that would suit their bulky frames!

While we were too busy describing the bears to one another, we barely caught sight of a Leopard, who crossed our jeeps and made a leap into the thickness of the Jungle, before we managed to click a picture of him.

We were on a roll! Thanking Goddess Luck, we drove on, now wishing we spot the Big Gun, a Tiger. By the shimmering lake, basking in the winter sun, who do you think we spotted?! No, not a Tiger, but a huge Crocodile!  We were exhilarated!

There’s something about visiting a jungle- all your senses come alive! There’s nothing to distract- no phone calls, messages or TV. If you stay longer, your sensations are only heightened. You’ll listen to the warning call of a Sambar deer and know that the Tiger is around. You’ll see pugmarks on the ground and figure out which direction he’s gone. You’ll smell the carcass of a dead animal and prepare yourself to the possibility of spotting him. Digression aside, Luck favored us once again.  Around a bend we spotted a couple of Tigers with their prey. One of them was tearing at it (It looked like the limb of a Deer) , while the other seemed to have had his fill. This one stretched and ambled down towards us.

He sharpened his claws on the bark of a Tree and sat upon a stone wall. He was close enough to give us a high five! The other one finished his lunch, licked his paws and regally made his way towards the ‘throne’ the other Tiger was seated upon. We learnt that they were 2 brothers- Tarachand and Chota Matka, the cubs of Choti Tara and Matkasur. It was adorable to watch them pat one another and unwind after a hard day’s ‘work’!

A long queue of Jeeps and Tour buses had formed by now and the cubs seemed to be enjoying all the attention! We had taken several trips into the jungle before and went on multiple trips thereafter- into both the Core and Buffer areas, but never did we experience such a spectacle! It was a First Day First Show for Shruthi and Ashwin and they were absolutely elated!

Prasad and I had to manage the kiddos who were all loaded into our jeep and now were clambering atop its railings to get a better view of the cubs. Their excitement (and ours) knew no bounds! We’d spotted almost all of the Big 5, except Wild Dogs, on a single trip! Did it lessen our enthusiasm to continue exploring the jungles of India? Not at all. It has only intensified our passion for Wildlife and Nature.

PS- Photographs were taken by Shruthi and me..