HomeParentingStarting playschool for our toddler
Parenting

Starting playschool for our toddler 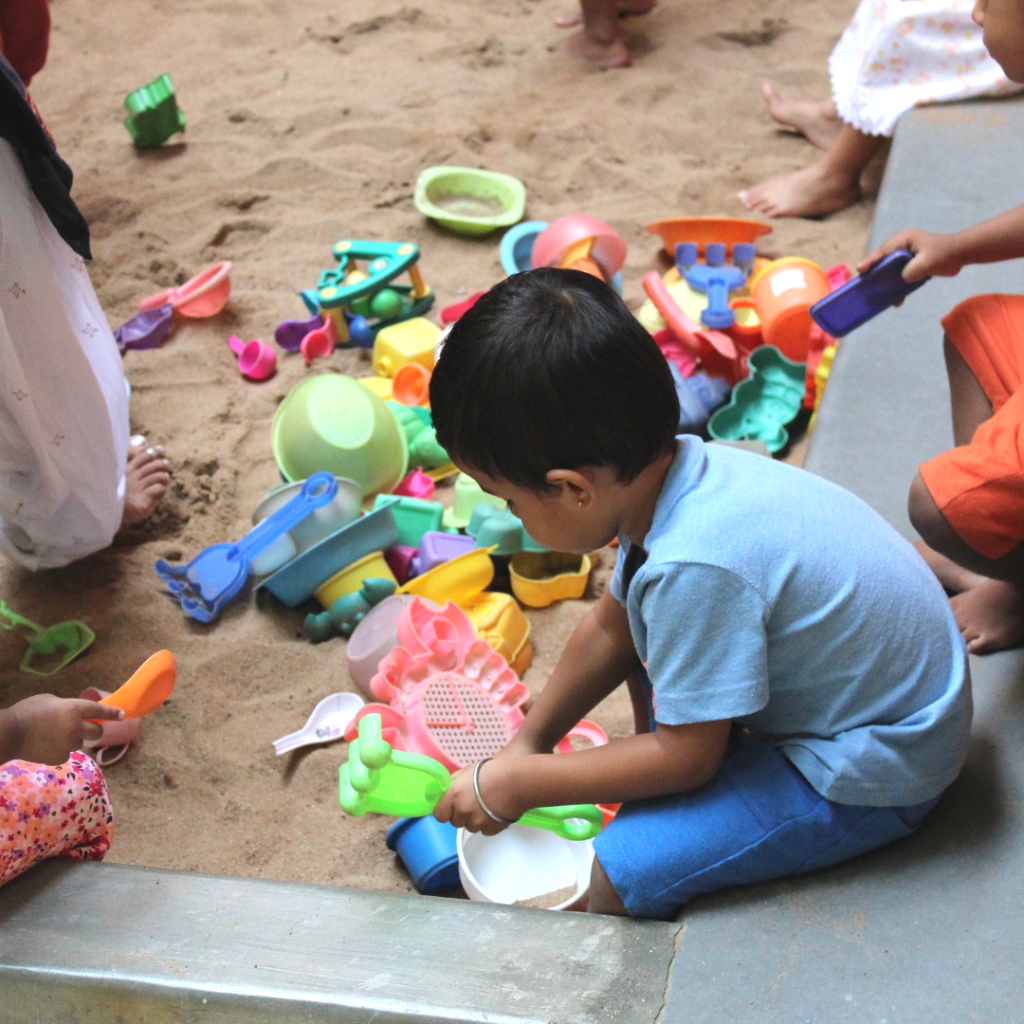 “I’m NOT going to school”, Madhav kept saying. Not kicking and screaming though. It was as if he didn’t want to go to school, but was curious to know how it would be like. On the first day, he somehow got dressed, wore a bag and got ready to leave. At school he just clung to me. The folks at Pratyusha made me stay with my little Monkey until he got used to the place and the teachers (who are simply addressed as “aunties” by the kids).

During Rhyme-time, he just sat on my lap and I let him.

We saw a few familiar faces around- our neighborhood kids- which made Madhav slightly braver. As he got more and more comfortable, he stood up, danced, sang a few rhymes and responded to the teacher’s questions about animals and their sounds. I was beaming.

When the kids were taken outside to play in the sand-pit, he didn’t even look back to see whether I was following him or not. He enjoyed spooning sand into a tiny bucket for a little while.

Then he spotted the big slide; Now there was no turning back for the little guy; He kept going up and down, up and down the slide, without a break.

The teachers let him play as long as he wanted to. After washing hands, the other kids made their way to the classroom for snack-time. But Madhav wasn’t ready to give up sliding yet; He kept at it for some more time. At one point he even peed somewhere. And the teacher told me it was alright- “We might have a few accidents before he remembers to tell us if and when he has to go”- she assured me. I was relieved and glad that she didn’t make a big deal out of it.  I was so happy that he’d found a safe place to play. The heavy, rusty equipment at our local park is pretty unsafe for the kids.

When he thought they might close the door to the play area, he scrambled inside. We were asked to leave. We’d been there a whole hour; They were going to increase his time there slowly, so that he wouldn’t run out of enthusiasm or energy. But Madhav didn’t want to leave! He asked the teacher to put his stuff back in the cubby!

He didn’t complain about having to go to school the next day. I stayed with him; He wanted to sit glued to my lap, but I nudged him to explore. The kids spent some time in an Audiovisual room. Later, a physical instructor swung by with a bag full of soft balls and tiny bean bags for the kids to kick around and do some exercise. Madhav had a “ball” that day.

The day after that, I was made to wait outside while he was taken in. Without me beside, he began bawling his eyes out. For one whole hour he did nothing but cry, even when he was taken outside to his favorite part of playschool, the play area. He was so glad and relieved to see me waiting outside. I had to convince him that I wasn’t going anywhere, that school is a fun place to hang out and that I would be right outside, waiting for him. It looked like he understood just a bit, because, the next day too he cried as he went inside, but apparently he calmed down once they began playing.

Now he sort of knows that I won’t be abandoning him and so he goes inside with a big smile and comes out even happier. The teachers tell me he’s having a ton of fun. And Madhav points at the school and tells me there’s an aunty inside whom he really likes!

Phew! I expected him to take a longer time to adjust.

Now I can’t wait to hear his stories and all the things he learns at school!

P.S- By the way, I carry a book of puzzles to distract myself with as I wait for him outside! And I’m loving all the exercise my dull brain is getting every single morning! 🙂