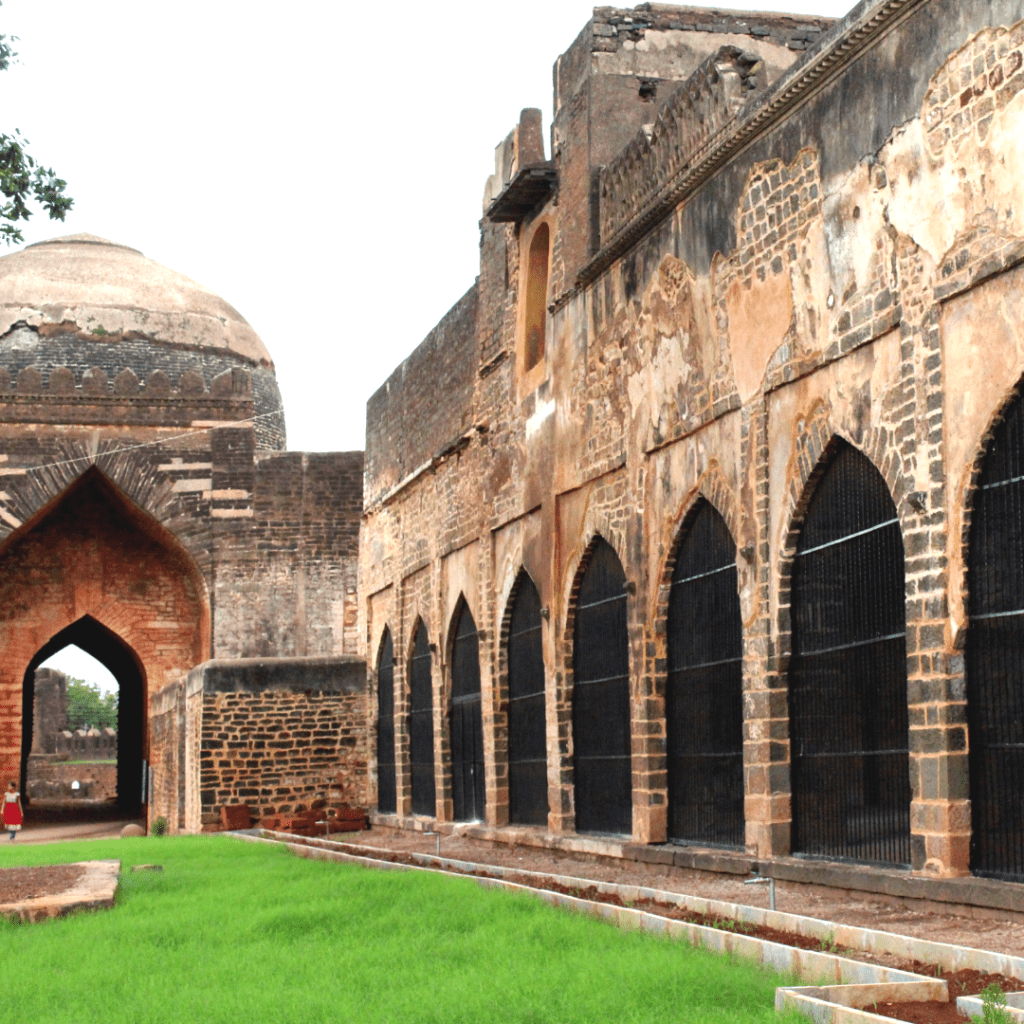 Before going to the Black Buck Resort, we visited the Fort in Bidar. The Entrance was free and open for all. Even vehicles could be seen entering the place without a fuss. No one seemed to be looking after the more than 30 monuments within the Fort.

As we walked inside, a man claiming to be a guide, asked us whether he could show us around for Rs. 500. We thought it was too much and said so. Actually he didn’t look qualified enough to be a Guide. He began bargaining with us, coming down to about 300 bucks. We ignored him and walked on.

The entrance was huge with heavy, aesthetically-pleasing doors (with a few sections broken). There were mostly-destroyed, partly-worn-out monuments and relics all around us. We couldn’t make out what was what. There were no maps or markers around the complex to help us. And there was no authority we could inquire. As if he knew we would reach this helpless state and seek him out, the guy calling himself a “guide”, was just hanging around nearby. And this time, he agreed to a fee of Rs. 200. Some information (not credible though it might be)  was better than no information at all, I thought.

It was hard to follow him as he spoke too fast, but he told us what certain buildings were used for- Stables for Horse, Prison Cells, Court, Guest Rooms etc.. And a bit about the Architecture and the History of the place. Probably built by the Chalukyas in the year 977 AD, the present-day Fortress was rebuilt by Ahmed Shah of the Bahamani Dynasty using red laterite stone (in abundance in the area) in the year 1428 AD. The Architecture is mostly Persian-style. (Source : Wikipedia and our “guide”).

Bidar Fort apparently has a number of monuments within the fortress complex. Prominent among them are the Rangin Mahal (“Painted Palace”), so called because of its elaborate decoration with coloured tiles; the Takht Mahal, or throne room; the Jami Masjid (“Great Mosque”) and the Sola Khamba Masjid (“Sixteen-Pillar” mosque), according to Wikipedia, but sadly, we didn’t enter any of those.

I wish I had done more research before visiting the place. I’d have demanded to know where everything was and asked to be taken inside. All I did was walk around, clicking pictures and admiring the beauty and the serenity of the Fort area, without a clue whether we were passing the Rangin Mahal or the Jami Masjid. It was August 15th, our Independence Day, but at that moment I felt least patriotic for the kind of Country I lived in, that didn’t honor its rich heritage and ensured its preservation for future Indians to enjoy.

The “guest room” had been closed, but the guide asked us to enter through the back door (which might have been a window, not sure, because it was too narrow.) and one could climb down a couple of storeys (?!?!) into rooms where (apparently) there was enough lighting and ventilation. Prasad came out drenched in sweat, but full of admiration for the ingenuity of the builders centuries ago. I thought it wasn’t right, going where one’s clearly not supposed to go, but HE didn’t mind; He was too happy to have seen an Engineering marvel!

We were told some “facts” like “this is where a scene from the movie “Dirty Picture” was shot” and some such. But we thanked the guy anyhow; He hadn’t exploited or harmed us. We paid him and explored the place by ourselves for a while. The weather was good and the long leisurely walk was energizing.

The next day we visited the famous Gurudwar called the “Guru Nanak Sahib Jhira”. At the Resort we’d learnt the story behind this religious shrine – Guru Nanak visited Bidar between 1510-1514 AD on one of his missionary tours and seeing the plight of the residents who didn’t have proper water supply, shifted a stone and removed some rubble from underfoot, all the while praying, and out sprang cool and fresh water, which flows even to this day.

We went inside, covering our heads with scarves, and spent some quiet minutes with the other devotees.

Later, we bought some Kadas for the kids and Roasted Corn-on-the-cob for everyone from the stores lined outside near the entrance.

It’s only after we returned home, did I realize how little we had seen. Not only had we missed looking at a number of monuments from up close at the Bidar Fort, we had also skipped a viewing of the Amrit Kund, the holy spring at the Gurudwar. How could we?!

The Big Fat lesson I learnt from this experience is that I need to thoroughly research a place before visiting, especially while traveling in India.