10 Books to Read This Summer 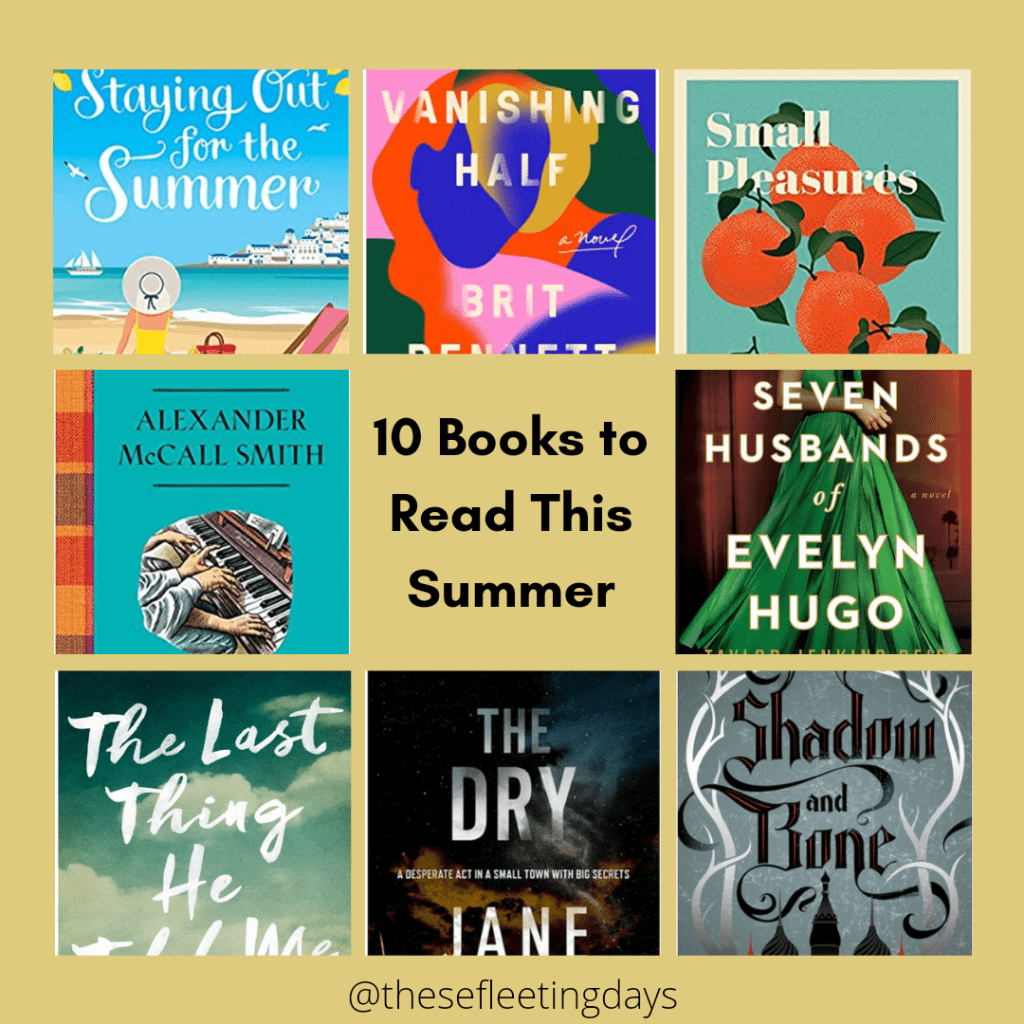 Whether you’re headed to a far-flung beach or a nearby couch, if you are looking for books to read this summer, here`s a list of our favorites.

The Seven Husbands of Evelyn Hugo

An aging renowned Hollywood actress Evelyn Hugo, after decades of dodging the press, is now ready to tell her story. She agrees to give an exclusive interview but only if she is interviewed by an unknown magazine reporter Monique.

The book takes you to the glitz and glamour of Hollywood in the 50s. Evelyn`s life, her ruthless ambition, and ofcourse the story of her husbands keeps the reader enthralled and captivated.

Desiree and Stella Vignes are identical twins living in Mallard, Louisiana, where people are proud of their Caucasian features and coloring, and most of them could pass for White.

After their mother forces them to leave school at the age of 16, the Vignes sisters run away to New Orleans in search of a better life. Years later, one sister drags herself back to Mallard with her black daughter. The other is married to a wealthy businessman, who knows nothing of her past.

The Geometry of Holding Hands

Our favorite philosopher and the editor of the journal “Review of Applied Ethics” has a new dilemma. Retired physician Iain Melrose approaches Isabel with an unusual request. He would like her to serve as executor of his estate

Closer to home, Isabel`s niece Cat has finally found the love of her life and has plans to marry him. But Isabel is beginning to suspect that Cat`s fiance Leo might be interested in more than Cat, namely her access to the family trust.

It is 50s London. Jean is nearly forty. She works as a reporter for the newspaper North Kent Echo. She is single and living the same way everyday with her demanding, overbearing mother.

Jean’s unspectacular life changes when a woman writes to the newspaper claiming to have experienced a virgin birth. In her journey to find out the truth, Jean experiences love, friendship and happiness, but will it be long lasting?

The Last Thing He Told Me

Hannah and Owen are newlyweds who are living happily on a houseboat in Sausalito, California with Owen`s 16-year-old stepdaughter who is not so fond of Hannah. Everything changes when Owen goes missing and the company he is working for is being investigated for fraud.

It is now upto Hannah and her stepdaughter to search for Owen and in their search, they uncover secrets held by the one person they loved and trusted the most in the world.

You and Me on Vacation

Poppy and Alex are best friends. They are polar opposites. While Poppy is a free spirit, impulsive, and adventurous, Alex is introverted, mild, and measured.

Every summer, they take a trip together, sometimes due to Poppy’s job, which sends her across the world to tour vacation spots to write articles on various locations. But 2 years ago, they had a fall out. Now Poppy has one chance to make everything right. One last vacation to win her friend back. While on vacation, will they finally realize how they feel about eachother?

The brash Scottish DCI is back. Finally, things are going great in DCI Logan`s life. He is happily settled down with the love of his life. All that is about to change when there are murders in Inverness and Jack’s boss decides to bring in some outside help and that turns out to be Jack’s past lover.

Heather isn’t quite ready to let Logan go, and as the dead bodies rack up, the life Jack has been building for himself may be the next victim to fall.

Set in a small outback town in Australia during the worst drought the country has ever seen, Federal Police investigator Aaron Falk returns to his hometown for the first time in decades to attend the funeral of his childhood best friend, Luke. Luke is suspected of killing his wife and son, before shooting himself.

Amidst all the tensions, suspicions and allegations Aaron finds himself in because of something that had happened in the past, he reluctantly agrees to support the local detective in the investigation to find out if there’s more to Luke’s death than there seems to be.

Staying out for the Summer

Having spent the summer of 2020 battling a global health crisis, Lucie Burrows is looking forward to a summer away from her stressful life. When her best friend Gavin, finds them a perfect place to stay in a Greek island, Lucie finally starts to believe it’s time to put the past behind her and embrace the Greek life.

But after a landslide puts the village into a local lockdown, Lucie is thrown together with Michalis Andino, the super sexy village doctor. As Lucie relaxes into the Greek way of life, she begins to wonder whether this lockdown might just end in a new life, a new love.

Alina Starkov is a junior cartographer’s assistant with the King’s Army. Her childhood best friend and fellow orphan, Malyen “Mal” Oretsev, has also joined the army as a talented young tracker. Having grown up together in the orphanage, Alina and Mal were best friends.

Alina was never special. But when her regiment is attacked on the Fold and her best friend is brutally injured, Alina reveals a strong power that saves his life. After it is discovered that Alina is a Sun Summoner, she is brought before the ruthless and powerful commander of the Grisha army – The Darkling. With Alina getting trained to be a member of the Grisha, she will find dark secrets of the Grisha that can change her life.